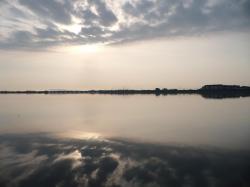 Your average middle-class working man in Russia was not even thinking about lunch yet when I was out of the house this morning, looking to get some action…. I mean, cardio exercise!  I will admit, it hasn’t been easy; last night I hit the pillow precisely at midnight, leaving me but a few hours of rest from a truly insane weekly schedule.  Oh well, such is life, it’s never easy, and if it is – something isn’t right!

Feeling tired and exhausted, I didn’t expect much real effort from myself, just basically going through the motions.  But somehow, somewhere, by some peculiar accident, I clicked on the Club Phusion button of my iHeartRadio app on the phone, and man – what an adventure.  They had such a sequence of amazing, action-inspiring beats playing at that time, I just couldn’t help but exceed my own speed limits.  Isn’t that what music is supposed to do during your exercise routine – give you some rhythm, some style?  Well, in my case, it took me to another planet, making me dance sideways and all the other tricks of the trade I have picked up over the years, which mean fun to me and sheer horror to all the people witnessing it.

Speaking of witnesses, again, it is quite amazing to find at least 3-4 people running around at 5 AM, seemingly these bad habits have found their way into the mainstream!  Who would imagine that one man’s madness would give others a reason to wake up earlier and try something new?  But there they were, a few brave souls, running right alongside me (and some opposite me) this morning, all cheerful, all smiling, and all wanting to talk to me.  Well, I was too busy running sideways to pay attention to anyone’s attempts at communication; I just found their presence peculiar, as only a few months ago, I was out there by my lonesome self – and loving it!

And as the good tunes on the app suddenly ended, and I still had about a mile to go, I realized that I had been missing something else around me, something also quite unusual even this early in the day.  As I turned the phone off, I had to take off my head-phones to listen to it – the world gone silent!  What a beauty, not a sound anywhere, a total audio eclipse, as if all in the world had paused and was waiting for me to catch and discover the moment.

I wish you could join me for all this fun, it really is worth it!  Until then,