What can I possibly say about myself… I used to be incredibly shy about speaking in public, and simply hated writing, yet now I somehow simply LOVE both! I live with my wife and 2 boys (now - large men) in a little invisible suburb called Langhorne, just north of Philadelphia.

I got married in 1995, and as it often happens, immediately began gaining weight! Over the years, I have gained over 50-60 lbs, without the slightest idea on how to control the expanding waist line. My eating patterns were truly chaotic, at best, and exercise routines sporadic and inconsistent. I was too heavy to run or even walk at a brisk pace, and despite being relatively strong, I was completely out-of-shape, with a huge gut always preceding me and weighing down on my entire life…

I kept on visiting gyms and trying on various routines, attempting to “turn fat into muscles”, as they frequently advertise. I have also tried countless diets, switching from Zero-Carb to Atkins to….. all kinds of other insanity. Nothing produced lasting results, and so I went on and on, ballooning to over 285 lbs, until I stumbled upon an interesting phenomenon that entirely changed my life - 5 AM Running! 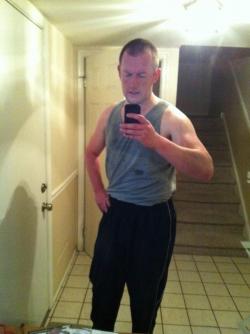 Like to Drink: Water or vodka - nothing in between

Dream: To live a day without a clock

Special Diets: None, I have a "thing" against diets

Pets: Never wanted any, but my family decided to get a guinea pig, his name was Roger and I simply referred to him as "the rat". Then my wife suddenly sent him off somewhere, likely to visit a snake farm. Roger never returned, and was replaced as a pet by our current dog Freddie. He is ok, and doesn't bother me much, unless I am eating a big sandwich.

I am a tremendous supporter of all animals, and am an active member of Friends of Animals, an organization that advocates for the rights of animals, free-living and domestic. I believe that all animals should be free from cruelty and institutionalized exploitation around the world.

Fight Club (not because of fighting, but due to its insane psychological depth)

The Game (the one with Michael Douglas)

Matilda (don't ask me why)