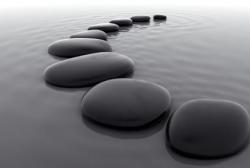 As I was driving home earlier today, I wanted to write a quick post about my knees hurting like crazy, and how, despite the pain, I still strongly disagree with the doctors and other people who suggest that running is bad for your knees.  Hey, tell me something I don’t know – sure it’s bad for my knees, but it’s so good for many other of my parts!

Anyway, we will cover the knees the next time, shortly, I promise.  Lately, I have been feeling over-worked, out of rhythm, tired, confused, just not myself, you know?  Basically, borderline frustrated, and actually for no good reason.  I am beginning to understand Forrest Gump, who was just sitting on his porch after Jenny had left him; a few moments later Forrest took off running and had not stopped for three years.  Not that I can run for three years, but I am starting to see his point – sometimes I just “feel like running”.

I guess sometimes just need to get back to square one, to unplug, to reset.  Multiple methods exist, people’s opinions vary – some rant at their life-partners for hours, some throw plates at the wall.  Then again, some people visit the shooting ranges and get their guns off, if you know what I mean, while others have aggressive sex.  Yet numerous others turn to drugs, alcohol or particularly violent video games, those that let you blow things up.  Punching a heavy bag (or another willingly-participating person) is also known to be effective.

Forrest did it differently, and I must say – I admire simplicity, and that’s what running is all about.  It is simple, no tricks, no gimmicks.  No equipment to buy, nowhere special to go to, you are already there.   Let go of the stress and let your mind wander off, no restrictions.  The same chemicals produced by the violent activities mentioned above will still kick in and get the job done, only in a cool and peaceful manner.

Typically, simplicity is a relative term, what may seem simple to one person will represent a world of complexities to all others.  Well, out there on the road we are all equal, no one is superior.  We have enough problems in life, and so I opt for simplicity.