There Can Only Be One

There Can Only Be One 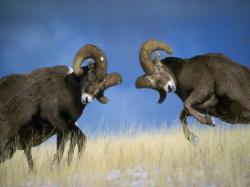 Throughout history, many rivalries have greatly fascinated and captured our attention.  Some are entirely trivial and insignificant, while others clearly transcend time, space and cultural differences.  Coca Cola vs. Pepsi, Star Wars vs. Star Trek, Ali vs. Frazer, Bill Gates vs. Steve Jobs, McDonalds vs. Burger King.  The list goes on and on.  However, few of these notable rivalries could possibly live up to the sheer intensity and competitiveness of the latest matchup:  Me vs. The Morning Paper Delivery Guy.

It was bound to happen – we occupy the same territory, at the same time, vying for the same road and ALWAYS getting in each other’s way.  And I get it, we both feel equally entitled to our place on the street, we both wake up bright and early and go out to accomplish what we feel is important to us.  Granted, his “significant” activity consists of throwing useless newspapers at people’s houses, while my goal first thing in the morning is to be left alone.  And we probably could easily co-exist out there, had it not been for the most primal, the most fundamental instinct of all men – competitive nature!

It is difficult to explain, but the moment we see each other on the road, something clicks and we both feel the same urge to attack and destroy.  And I get it – he is annoyed that I run directly in his path, making him divert his attention from the very important task of tossing printed garbage at driveways… And in turn, I feel that if I’ve sacrificed so much and actually awoke this early in the day, I deserve the clean road, empty of imbeciles and other destroyers of environment.  This is my time!

On several occasions, I clearly sensed that The Paper Boy is trying to hurt me;  not sure what gave it away, might be the newspapers flying dangerously close to my head every minute or so… And then the same competitive nature in me also kicked in, and now I simply can’t help but mess with him at every possible opportunity.   Last time I saw him driving up the road, I started running directly at him, going fast and keeping my facial expression dead-serious, appearing as crazy as I could… The man stopped the car, and – not knowing what else to do – simply kept looking at me with his mouth open.

After I swerved at the last possible moment, he took his first breath in minutes… The message was loud and clear:  there can only be one king of the road at 5 AM!

Check out this video (somewhat related!)