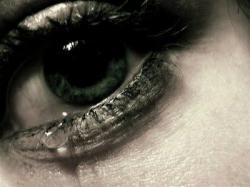 It was close to 6 o’clock when I stepped out of my office building; the sun was on its final decline toward the horizon; the colors were flying in the sky, the evening was slowly setting in.  I walked toward the parking lot, remembering that I parked all the way on the other end – just an old habit, craving for that empty space around my car.  A few extra minutes of walking actually felt somewhat refreshing and peaceful.

As I made my way through the deserted lot, I saw my car standing all alone on the further side of the open space and as I angled toward it, something else caught my eye – just a little dot, far away on the opposite side.  I looked over, squinting my way to seeing what it was… and, to my surprise, it looked like a dog, dark and fairly large.  I had not seen a dog on its own in some time, let alone in the office parking lot, so I decided to let someone else deal with it and simply get to my car.  As I began walking again, the dog seemingly noticed me as well and was now looking in my direction.

I was still somewhat far from the car, so I picked up the pace a bit, just short of running.  As I squinted over to the dog again, I could see it was now walking toward me, ever so slowly, yet looking directly at me… I remember questions racing through my head:  why is there a stray dog in our parking lot?  Is it really interested in me?  If I sprint over to the car, can I beat the dog to it?!

Logic told me that running may not be the best idea, however, I was much closer to the car than the dark monster…  Oh, to hell with it – I went for it, running like mad, and discovering in the process that my best running days were definitely behind me.  As I took a quick glance toward the dog, I simply couldn’t believe my eyes.  In what seemed like a fraction of a second it was now just a few feet away from me – a German shepherd, as it turned out – defying all logic and gaining on me, its eyes bloodshot, mouth wide open.  Instead of running, instinctively I turned around.  The dog jumped a little to the side, darted back in, and then sank its teeth into my leg.

I felt myself falling, and as I tried to stop the fall, my whole body twitched and twisted with a sudden jolt.  I was sitting up on the bed, grabbing at the sheets and listening to the siren outside, or was it my own slow motion scream?  I reached down for my leg, feeling somewhat nauseous, breathing rapidly.
I knew it wasn’t real, however, I’d never experienced anything so lucid, so vivid and lifelike…

It is true that dreams are made of memories and hopes, and likely tell us so much about ourselves, about our own character.   We all have worries and insecurities, emotions and hidden weaknesses.  Could it be that our dreams are proactively telling us to solve whatever it is that may be lying dormant in the locked basement of our subconscious?  We can run from the truth of our emotions, but we can never hide from them.  If we ignore them, they chase us in our dreams; it might be better to take a moment and listen.