The Sound of a Piano

The Sound of a Piano 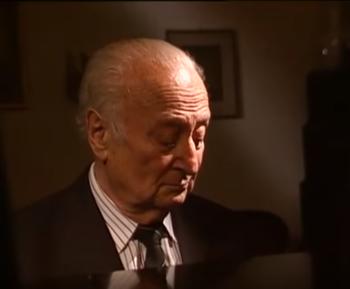 The old man slowly walked across the stage and sat down at the piano.  Even a short walk was difficult for him, now that he was 86 years of age, requiring a moment to catch his breath and gather his thoughts.  He looked down at the piano keys, and briefly glanced toward the audience.  He couldn’t quite see the faces in the crowd, but he knew that they were there – his family, sitting in the front row as always, just as they had always been throughout his life.

In the past, the mere thought of his family would bring tears to his eyes, followed by an overwhelming pain that made it difficult to breathe… Over the decades, the pain had become dull and ever-present, a constant weight that subsided only when the music played.  And as the sound of Chopin’s Nocturne filled the room, his mind could temporarily let go and travel to a time and place where his family was with him, when they were still alive and real.

For the longest time, Władysław Szpilman had stopped asking the most obvious of questions – why?  Why did his family have to be taken away and murdered?  Why did countless others deserve to die?  There was no need to ask a question to which there can be no answer, no possible logical explanation.  The Holocaust has changed the lives of millions of people, and no matter how much we may try to understand the roots of hatred and prejudice, there can never be a valid reason.

Yet, as an artist, Szpilman had always wondered about something else, something significantly less philosophical.  How could someone who listened to Chopin and Bach shoot a mother holding a child?  How could a nation that produced Wagner and Beethoven send thousands of innocent children to the gas chambers?  How could people that seemingly appreciated art and listened to classical music mercilessly massacre people by train-loads, without a shred of guilt or regret; sifting through the mountain of human bones and then sitting down to dinner with their families?

And it was only after years upon years of sleepless nights that Władysław had finally realized the true power and magic of music.  A classical masterpiece will elevate people and give spark to incredible accomplishments, but it will also embolden the villain to perform his evil actions, if he somehow feels they are justified in his twisted perception.  The Nazis convinced themselves they were the “master race”, ridding the world of the dangerous “vermin”, and they used the power of classical music to fuel their march of madness.

Still, Władysław had always known that it was music that saved his life in those dark days.  And it was the music that gave him the power to go on, awaiting the day when he would see his family once again, smiling as classical sounds filled the void in his heart one last time.