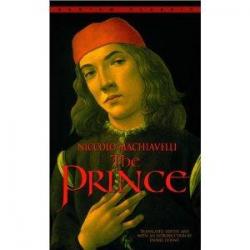 No, I am not talking about Prince William or that other prince in the same royal family, nor am I talking about The Artist Formerly Known as one….. And, as a matter of fact, this is not even related to running and exercise, but I was so impressed with some of the sayings written by Machiavelli in his “Prince” writing published in 1531, that I felt like sharing with you.

Keep in mind, even though these are written in regards to warfare strategies, they are equally appropriate in any dealings between two people…. or even as you struggle with your most powerful enemy – yourself.

1.  Either treat people well… or completely destroy them. Seems a bit harsh and almost violent, but if you analyze this one a bit more closely, it seems that if you fail to treat people well, you will end up creating new enemies…. Deep!

2.  If you suspect someone could pose a future threat, deal with them now. If you feel someone you know may be a problem at some point in the future, but you continue to hang on to that person, giving them one chance after another, you may be better off simply cutting off that tie, as it may cause more complications and damages later on.

3.  Study the greats. That way, even if you fall short, you’ll end up good!  Great people all share some of the same characteristics and organizational patterns, so following in their footsteps to some degree may not be a bad idea!

4.  It is safer to be feared than loved. This may not be true in case of a real, unconditional love, however, in most cases, when love depends on some particular factor or factors, when those factors are gone, love may disappear as well.  Fear is usually the last feeling to go!

5. As long as you don’t insult people, steal from them, or threaten their livelihood, you’ll be fine. I guess that just about covers all the bad things you could do to someone.  Physical assault is not listed, as it was no big deal back in those days….

6.  Perception is reality. What people perceive of you will eventually become the reality, although we all know of numerous exceptions.

7.  Make sure people don’t hate you. Oh, this one is difficult!  I guess it’s ok if someone dislikes you, just make sure there is no hatred on the horizon!  If impossible, see No. 2 above…

My apologies for this minor deviation in our regular coverage of topics, but for some reason, these have a tremendous impact on my mentality and so I wanted to share with as many people as possible.