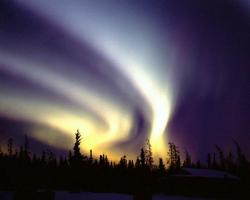 It has been nearly 6 hours, and yet I still feel the after-shocks of this experience.  What a rush!  You may recall that I have been anticipating Yom Kippur, which always provides an excellent opportunity for me to punish and push myself beyond all acceptable limits.  And so, just as the tradition requires, I took full advantage of the event, starved myself to the extreme and was out on the road bright and early (actually, only ‘early’) this morning.

These post-starvation runs have always been challenging and taxing on my system, which is what makes them so appealing to me, but I think today one of the gauges definitely flew over the top and caused some major malfunctioning…  Typically, toward the end of one of these I begin seeing stars and have trouble thinking and breathing just from the sheer exhaustion, however, today, the stars began flashing quite early on and insistently reminded me that trouble was fast approaching.  “No”, I said to myself, “it can’t be that quickly, stop being paranoid! … Perhaps the stars really are nice and shiny today, flashing across the sky right in front of me…”  Unlikely, but ok, I bought it and pressed on.

Then, I noticed truly gorgeous waves of white light sweeping across the skyline, starting at one end and rolling through the entire nightline and breaking at the other end.  “I must have missed the announcement of some unusual astronomical phenomena taking place this morning”, I thought and continued on….  Must have been one of those polar or Northern lights or whatever those may be called, I am sure there must be a very good explanation to all this.  As I pondered the possible cause of all these events, I was suddenly distracted by a very strange, ringing noise coming into my headphones, shouting over the iPod tunes which I actually had blasting rather loudly at the time.

I switched the iPhone off and removed the headphones, listening a bit closer to the sound of my own breathing, and yet the buzzing, annoying noise simply kept getting louder and louder…. What is that?!  Was I catching some sort of a secretive international radio transmission, intercepting a message from the Russians, who will now pursue me for the rest of my life, trying to figure out whether or not I had been able to decipher their code…

The noise kept getting louder, but I just would not stop, and somehow I didn’t notice that I was now on my way back home, incredibly having made my entire 7-mile journey rather quickly and hardly remembering any of it, which does happen from time to time, especially when I am pre-occupied by some curious events taking place all around.  Great, nothing to complain about, I don’t actually want to remember anything anyway, I simply want to get through the experience, reap the benefits and move on to the next challenge.  Feeling good about myself, I walked back inside my home and proceeded upstairs.

That’s when I first noticed that I was covered by some weird combination of mud / leaves / dirt and who knows what else… What on earth?!  Before I could answer that question, I also began wondering about the scratches and light bruises on my knees and elbows… Come on, now!  Was I on the ground at any point in time….?  What did actually happen this morning?  That’s when I glanced at the clock and knew that I was only out for about 22 minutes…. Which either meant that I made the 7-mile distance in under 22 minutes (a new world record!), or simply fell down somewhere along the way, possibly and hopefully unconscious and after getting back up, continued running but in the opposite direction, which brought me back home….

I guess it’s just one of those mysteries that will never be uncovered!  Until that time, simply