The Meat of the Matter

The Meat of the Matter 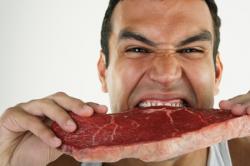 As the memory of 2010 slowly evaporates into the channels of history, I am trying to stay true to some of my “resolutions”, well, not exactly resolutions, more like “intentions”, because I did not go so far as to make a mental stipulation, or  a vow to myself.  I have actually done that in the past, and boy, living up to such a commitment is tough and life-changing.  No more.  I guess I am not that rough / tough / macho anymore and simply want to be low-key…

Anyway, one of these “intentions” was to give up meat again.  I went without meat, 100% complete cold-turkey (pun intended), for about 18 months back in 2006-2007, when I was determined and anxious to lose weight, and did anything and everything that worked.  So, combining mad 5 AM running and no-meat diet somehow produced amazing results in a rather short period of time, but more importantly, I felt somehow lighter, faster, even emptier.  Difficult to describe, but it was good.

Since then, with the weight off, I stopped paying attention and let the meat back into my life.  All in all, it was not to such a degree where I felt it could make a difference….. but somehow, still, the feeling was not the same.    Then one day, at the end of December 2010, I felt heavy once again, for the first time since 2006!!!  Just at the time, my boss was about to dig into a plate of chicken fingers and other similarly-heavy delicacies.  That’s when it hit me.

For some reason, meat has that effect on my body, I have no idea why, and of course, no one else knows why and most people, when they hear my diagnosis, choose to laugh in my face.  Well, laughing I like, but that doesn’t help the fact that each time I eat anything with meat, I gain weight.  It’s like my metabolism all of a sudden just stops…. So I told my boss: “No thanks”, and actually decided to take a long break yet again.

Just a few days later, I feel much better.  My guess is that different people react differently to various food groups.  So even as everyone around me continues to get a good laugh at my expense, I will try to stick to this current policy for as long as I can – maybe I am onto something!