The Greatest Mystery of All

The Greatest Mystery of All 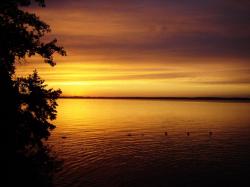 Ah, the good old days!  It wasn’t that long ago that as I stepped outside at 5 o’clock each morning, I was always the only one crazy enough to be out there, enjoying the solitude and the utter peace of the early hour.  Not so, not anymore – in the words of great Bob Dylan: “… but how things have changed!”

Nowadays, when I manage to sneak out at 5 AM, there is an incredible flurry of activity taking place already, with numerous other 5 AM Runners occupying my space and my roads, or what I should say  used to be exclusively “my roads”!  As soon as I step out on the main street, I literally bump into one of the groups of these newly-discovered early morning enthusiasts – yes, they travel in packs!  Seemingly the new 5 AM trend has hit the prime time and is now the hottest thing around!  Well, maybe not quite the hottest, but definitely a step up for my lonesome-self!

But that’s not even the most peculiar thing of all.  You know what is – they are mostly women!  Actually, I believe all the new 5 AM Runners are female, which puts me in a rather precarious position – here I am, running around with a bunch of chicks in the middle of the night!  But in all reality, it’s not a big issue since – as you may know – I am not really a pack-type of an animal and prefer to run it alone; so just like back in the days of old I go at my own pace, quietly observing the female population from afar.

And as I slowly run down my usual path, I get a unique chance to observe the women in action – typically if you look at women for any long period of time, you are accused of staring.  Not so during the night, the rules are all gone, I get to stare as much as I please!  And so as I stare away, I simply can’t help but admire women in general and how purely superior they are to us men!  And I mean this in all sincerity – everyone knows that women are smarter and cleaner than men, however, there is so much more to it!  There is that mysterious and fascinating side to a woman that no one will ever understand, that air of quiet superiority and confidence, while remaining entirely graceful and delicate in all that she does – even while running outside at 5 AM…

I think it’s been scientifically proven that there is actually one thing men may do better than women – we can throw an object much further than women… like a rock or something similar; that’s about it. Hey, at least we are superior in something!  But beyond that, every man knows all too well that he is nowhere near a woman’s level, which leaves us wondering why it is that women talk to us at all.  Only one possible explanation – alcohol!

Well, at least I have some food for thought and observation during my long 60 minutes out there.  Until the next time