The Fruit of Labor

The Fruit of Labor 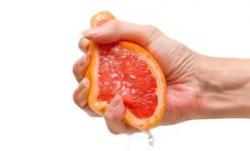 I was looking over the latest email I received from the Men’s Health Magazine, suggesting that I try their newest, revolutionary diet, which requires no effort, no exercise, no restrictions, and, I quote: “Eating only the best foods available, including cheesecakes and pizza…”  Sounds pretty tempting, no more need for my early-morning torturous, to-the-edge cardio exertions!  Just relax, and enjoy that pizza….

As I clicked my usual ‘DELETE’ button, the most recent discussion (argument) with my wife came to mind.  At the time, we were, in fact, talking (quite violently) about certain types of food that work naturally as fat-burners, even providing a short-term boost to your metabolism.  While my better half had insisted that no such foods exist, I could only think of one that over the years has proven to have nearly-magical fat-burning powers, puzzling scientists and athletes alike, the one and only – GRAPEFRUIT!

I do realize that a grapefruit is not a calorie-free fruit, as some diets would suggest. Don’t ask me how, however, grapefruits do contain certain elements (enzymes) that speed up the rate at which our bodies burn up fat, thus speeding up the entire metabolic process.  It is used widely by football players and wrestlers, among other athletes, in combination with rigorous workout routines; in fact, NO SPECIFIC FOOD will ever work in and of itself, like a magical potion.  Only a proper combination of a natural fat-burner, such as grapefruit, AND a measurable cardio workout, such as running or walking, can produce any lasting and memorable results.

In spite of being right, I still lost my argument and my wife walked away smiling good-heartedly.  Hey, I have no direct scientific proof of this, in fact, the entire array of my grapefruit-related knowledge comes from a retired football player / freestyle wrestler named George.  Somehow, somewhere, there has to be some truth to this popular belief, but even if there isn’t – well, you will just enjoy this relative newcomer to the citrus clan!