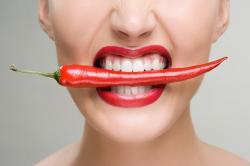 Writing, or actually even thinking about this topic, makes my blood boil, makes my nose and other parts sweat and just in general raises my body temperature by a full degree.  Just picturing hot and spicy foods in my mind makes me want to cry like a little girl, but I had to put aside any personal feelings and preferences as I embarked on researching the boldest of all claims – that spicy foods greatly increase metabolism, thus promoting effective calorie burning & weight loss.

As an open-minded, exceptionally lazy individual, I am willing to try just about anything to improve my chances of losing & keeping weight off and finding the ultimate formula to the metabolic / diabolic dilemma!  But is eating hot peppers really the answer?  If I were to attempt this red-chili diet, a lot of people around me would have a good time watching the show, as when I eat hot foods, I can’t breathe at all, I sweat like a pig in a sauna, pound my fist on the table and curse in all the languages that I know and don’t know.

All jokes aside, I was able to find research according to which a spicy meal can in fact increase metabolism by only about 8%, which is actually not a lot at all.  However, much more importantly, it’s been proven that spicy foods also make you feel full much earlier during a meal, thus decreasing the amount of calories you intake.  Good news or bad – I simply don’t know.  But I am still not going anywhere near anything spicy & hot.

And as I used an example of a sweating pig above, I actually decided to look up and confirm yet another incredibly important fact – pigs really don’t sweat!  So why is it that women compare most men to sweating pigs?  Apparently, the answer is that they actually refer to a pig iron, which is what you get when you melt iron for the first time; that form that first comes out from a smelting furnace, before it has a chance to cool off.  Probably not what women have in mind, but it will do for the purposes of this discussion.

And so until further notice, please stay away from those ghost peppers (look it up) and stop pouring Tabasco sauce on everything you eat, and instead just