Take a Breath… It Helps!

Take a Breath… It Helps! 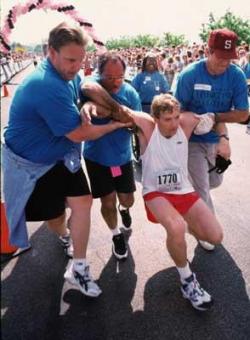 OK, let’s talk about what really matters, and what really stops so many people from enjoying running, or any serious cardio for that matter.  I can certainly speak from experience when I say that the only reason I did not take up running earlier in life was the fact that I was always out of breath.  A couple of minutes into it, I’d always slow down back to walking, as I was gasping for oxygen, unable to see, think, and, more importantly, breathe!

As I recall, that was by far the hardest element to deal with as I was learning to run.  It took time, and I definitely remember that I had to build it up, but once you do – it’s a whole different planet!  Then, and only then, can you begin thinking about conquering longer distances and accomplishing any weight-related goals.  And again, only then does it become achievable, only then it becomes easy.

I could never really describe how it is that I breathe when running…. that is,

until someone specifically asked me on Facebook.  I never thought about it, and I never really cared, since no one taught me how to do it properly, I simply learned to do it my way, whether right or wrong.  If it works, that’s all that matters.  But most recently, as my trusted iPod fell apart again, and I have been running solo (no musical accompaniment), I have actually begun to listen and to pay attention to my own breathing patterns.  And, as it turns out, it’s quite fascinating what some of us manage to do in order to be able to run!

First of all, to dispel the old notion claiming that you must breathe in through the nose and out through the mouth – not true.  In fact, as I read on the topic, it is generally considered pretty good practice to breathe through both the mouth and nose.  If anything, it will result in more oxygen coming in through the airways, which is amazingly important.

Secondly, the pattern of breathing is also equally important.  Through my recent observations, I discovered that when running, I am taking a lot of short breaths in, followed by a lot of short breaths out; so it is as if I am actually breaking up a single normal, deep breath of air into a number of smaller steps, taking in that air in portions.  The same thing seems to happen on the way out, I let the air out in stages as well.  As I said, I have never actually noticed, nor pay attention to this pattern before, however, it probably sounds a bit funny to an observer standing by – if someone were to observe me run, which is normally impossible, since no one is crazy enough to get up this early!

I have also heard of a ratio breathing, where, for example, for the first four steps of running you’re inhaling, while exhaling for the next two, alternating between steps.  That would be called a 4:2 ratio.  I have never tried it, and simply wanted to share this finding with everyone, so judge for yourself.

I have read that a proper breathing technique can make or break a runner.  That is probably true, however, from my perspective, I just wanted to learn to run, which most likely is the case for 90+% of the people out there.  If you somehow discover a different, yet equally effective breathing technique that works for you – so be it!  If you can run for a good while, who’s to say what’s right or wrong; as I said above, if it works, that’s all that matters!