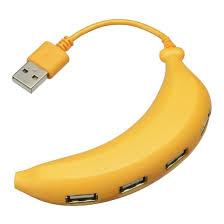 I have received a great deal of comments about my Grapefruit post a few weeks back, some in support of my grapefruit admiration, and some in opposition of it…. and then also some other, simply calling me a crazy nut, but we will save those for later…  Having discussed grapefruit and its alleged weight-loss benefits, I completely forgot to mention another amazingly healthy fruit (or a berry, as some refer to it) – banana!

My younger son is typically force-fed one banana per day, for as long as I can remember, so we always have an abundance of bananas in the house.  In fact, at times we have an over-abundance of them, in which case I also get force-fed a few bananas here and there, just to reduce our inventory and get rid of the ones that are about to rot (the choice is : give it to me or throw it in the trash can).  I must admit that there is probably no other quick snack out there that can match a banana for its filling quality, as it somehow manages to fill you up for quite some time, without adding too many unwanted calories in the process.  Not sure how that works!

Unlike grapefruits, bananas don’t have any magical weight-loss powers, but they are probably the best possible choice of a quick, pre-lunch snack, something to grab on-the-go, or in our case, something to eat after a rigorous cardio routine.  Although it looks quite disgusting, however, I have even witnessed some people adding bananas into their cereal bowls.  As Larry David said, “Whatever Works!”, and this one does.

So, the next time you are starving before or after lunch, try a banana, you may just like it!