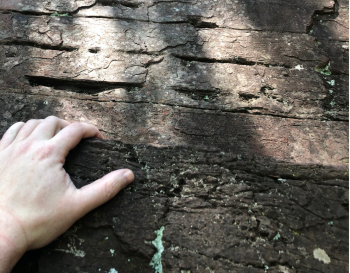 I haven’t felt this tired in years; the muscles I never knew I had are burning up – what a rush!

And yet I’ve never been happier, this exhilaration is beyond anything that words can describe.  I’ve wanted to try rock climbing for a while now, and even though I quickly realized how unprepared I was for the whole adventure, I feel that I definitely pushed myself to accomplish something!

To those who know me, the story will seem perfectly normal, and to those who do not, it will feel like a quick flight over the cuckoo’s nest, but this is absolutely the truth and nothing but the truth!  I waited for the perfect weather day and simply drove over to the High Rocks State Park, the closest civilized rocks I could find.  Should I have prepared at least to some degree, scheduled a lesson, bought special shoes, etc, etc? – absolutely!  Clearly, I did none of those things; rather, I just showed up, put on my sneakers and stepped up to the rock.

As you can see from the images, these rocks at first appear unapproachable and totally impossible to work with.  But if you look closer, there are places to step on and there are certain ledges to grab onto.  And so, relying entirely on my childhood experience of climbing things (32+ years in the making), I began my historic ascent.  That’s when I realized that sneakers are certainly not the most proper footwear for the occasion and that I am incredibly out of shape and should not be doing this at all…

While pondering what to do, and figuring out how to get off the damn rock, I suddenly heard voices and saw a bunch of people moving around above and below me.  Turns out, a group of professional rock climbers arrived on the scene and were about to do some serious & organized climbing, with all the tools, ropes, hammers and Lord knows what else.  And just as surprised as I was to see them, they seemed equally surprised to find an overweight dude in sneakers climbing up a rock without any of the fancy stuff that they brought along – primarily, without any safety implements, but with an iPhone!

More than likely, they assumed I was there to jump off a cliff – hey, it happens – but after we exchanged a few words & greetings and they realized I was not insane (I guess I fooled them), they were nice enough to offer me the use of their ropes and gave me plenty of pointers on where to step, what and how to grab, and much more.  And so, inasmuch as I wanted to go “rogue” and have an unscripted climbing experience, I still ended up joining an organized movement.

As I am sure you can imagine, I am going right back to the rock the next chance I get, just as soon as I purchase the right shoes, lose the iPhone, get a water bottle and some chalk – turns out it helps you get a better grip.  Who would imagine!?

Hey, you want to see the images from the climb?  Please click here.