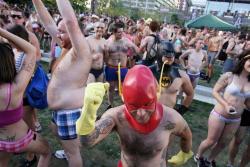 We hear of people protesting by refusing to eat, drink or sleep.  Some people are refusing to speak as a sign of protest -which in some cases is truly beneficial to the society in general.  Here I just read about a bunch of people in Utah who decided to protest the ultra-conservative laws of the state by running around in their underwear…

You ask why not just run around naked?  Well, that would be against the law, and they did not want to go that far.  So, the next logical step was to strip down!  Colorful boxer shorts and nightgowns came in handy – must have been quite a sight!

From what I read, close to 3,000 people ended up participating in the event, and no one got arrested – bummer!  But all in all, if you are looking for a creative way to start running, it doesn’t get better than this!  Care to try it in your neck of the woods?  Whatever you do – run naked or half-dressed, just remember –