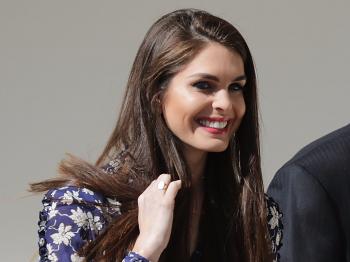 In the most important political news, of course, is the choice of Hope Hicks as Trump’s next Communications Director.  This is fantastic, since she is really hot and no one will ultimately care what she says or does during those fun-filled press conferences.  You know everyone will still watch her with uninterrupted attention and let me tell you – this is perhaps the best move made by Trump since bringing Jared & Ivanka along to Washington, D.C.  You think I am kidding?

Get this – the research shows that men who spend even a few minutes in the company of a hot woman perform worse in tests that measure brain function than those who communicate with a person they don’t find attractive.  Why do you think Trump is always surrounded by some of the hottest women on the planet?  I think for a short while he forgot this very important rule of thumb and had several people up there who were quite difficult to look at, and the results were disastrous.  Not that it matters, but just for your general information – women don’t have the same problem, and are not affected by chatting with a handsome man.  They simply don’t care, their mind works the same way (perfectly) at all times.  Men, on the other hand, use so much of their brain power trying to impress a gorgeous woman, there is virtually nothing left for any other activity.  Bottom line, we all look forward to Hope Hicks’ first press conference, as it promises to be one of the most-watched events in history.

On a more serious note, there is a huge problem with all that just took place in Charlottesville, Virginia.  Look, everyone knows that racism is still strong, and that the Neo-Nazi groups are out there, and we all know what they do and what they believe.  That will probably never completely end, since some people simply cannot live without hate in their heart.  It is just the way they were created.  It doesn’t bother me much that they hate Jews, despite being Jewish; I don’t exactly care about their ideology of white supremacy and white nationalism, despite being white.  In fact, their hatred of the Jews makes no sense whatsoever; they wouldn’t even know I am Jewish if they were standing face-to-face with me.  But here is what does bother me.

They tell others what to do and feel.  They run around screaming their nonsense out-loud, thus causing others to feel a certain way, which affects many people a great deal, especially the kids.  I absolutely don’t mind that these guys hate me – it’s not a problem.  I don’t even mind that they teach their own children to hate me – that comes with the territory.  But I do mind when they hold events and try to spread their hate to people whom they don’t know.  By doing so, they violate the 5 AM Running Rule #10, which teaches not to tell others what to do, and that upsets me beyond belief.  I wish they would just relax and go watch a Hope Hicks’ press conference like all normal men (and some women) will do, and let their limited brains rest a while.

I never comment on all that Trump-related action, and as you all know, I never get involved in the politics or even vote.  However, in my humble opinion, not coming down hard on these Nazis is the first real mistake that Trump has made, which will likely cost him in the months to come.  Only time will tell, but mark my words and mark this date.

Hey, can anyone truly question that we live during rather interesting times!?