Early Episodes or It Is Early Yet…

Early Episodes or It Is Early Yet… 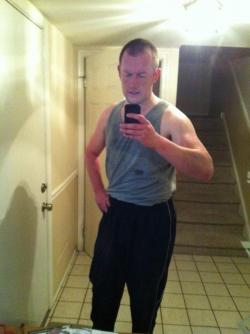 This one will be slightly different, as I’d like to cover a lot of ground, without tiring out my already tired readers.  By the way, this is what I look like after one of my 5 AM adventures:

Believe it or not, but this is a true fact.  I was not planning to run this morning, had my mind set on doing other things, and yet amazingly enough, I came to my senses while already on the road, out of my development and looking at the blinking red traffic light… Unreal!  I woke up and operating on some sort of subconscious level, working on pure instinct, must have put on my shoes and went out, not even really thinking about it!   They say we don’t really think about breathing and, to some degree, about brushing our teeth;  certain daily activities just happen automatically.  Well, now my auto-pilot not only breathes and brushes teeth, he also learned to run on his own…. I guess soon enough I will be sleep-walking…. that is, sleep-running!

Is it me, or is running in the middle of the road feels faster and easier?  I am talking about a real busy city street, filled with cars and traffic during the day, yet wide open during my times of active operations.  I may have mentioned previously that because I have very limited alternatives, and because there is hardly a car out driving at 5 AM, I simply run right on the roadway.  Now, when the car does appear in front or in the back of me, I either run across to the other side of the road, or jump over to the sidewalk.  I noticed today that running on the sidewalk simply feels slower… not sure why, has to be all psychological, it is the same distance, the same rough pavement underneath my feet… Makes no sense, and it doesn’t have to…

With about a mile to go, smelled a distinct odor of a bear.  No, I am telling you!  No kidding!  How do I know what a bear smells like?  Well, here is yet another true story.  Growing up in Russia, as a kid I used to go to this little amusement park, situated on the outskirts of our town, and nowhere near the size of an amusement park you are probably used to.  Just about 12-15 different rides, simple yet interesting to a kid of 8 years old, or so…. For some unexplained reason, inside the park there was a lonely cage, with a decent-sized bear in it!  Now that I think about it, it had to be a total and complete insanity to keep a bear in the middle of some kids’ amusement park, for a number of reasons, however, back then, it made total sense to me and my friends!

I don’t know who actually was in charge of taking care of the bear and feeding him, but I know that he smelled like something from the darkest layers of hell!  The rest of the kids and I would come up close and throw him candy and similar snacks, and we would have to jump back when the bear would approach…  It was scary then, and it would probably be scary now also, even though I am about 5 times the man I was back in those days…. whatever that means!  The distinct smell of the bear is still ingrained in my memory…. Well, I smelled the same distinct odor again this morning, and it is not entirely impossible that a lonely bear may have walked through the peaceful night streets of Bucks County without alarming too many of the residents…. except for one.

The real question remains – what to do if I actually run into a bear during one of my outings?  Do I tell him about my early support of his brother-bear back in Russia?  Do I exploit my newly acquired skills of a runner and try to outrun the animal?  Or do I simply face my fears, live up to my reputation as a tough Russian and engage in a battle with the wild beast, hoping that the bear will realize that one of us does not belong outside at 5 AM and will just back off….