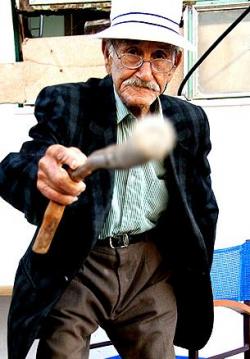 “Everything is funny, as long as it is happening to someone else” – Seinfeld.

Happy upcoming Labor Day to all!  Given this long weekend off, I felt encouraged and empowered to put together a string of super-dedicated running sessions.  And of course, I had no choice but to follow up on my threat (to myself) to run every day from now on.  With all that on my mind, I went to sleep determined and happy, skipping Saturday Night Live, and opting in for an earlier wake up.

My plans were interrupted at approximately 1 AM, when my wife stormed into the bedroom with an enormous smile on her face and a smell of something strong on her breath.  She claimed to have been out salsa-dancing with her girlfriend, and considering the time of the night I decided to buy the story and simply go back to sleep.

Of course, that wake up cost me dearly, as I couldn’t fall asleep for a while, and ended up awakening at 6:30 AM – totally unacceptable and ridiculous, even by my own low standards!  I felt like punching myself and giving myself a beating, but instead simply retreated to the basement, jumped on my laptop and plunged myself into work, which has miraculously accumulated since Friday night.  Then at about 7:30, I said to myself: “No way!  I will not be derailed by my wife, by salsa, or by any other hot sauce!  I am going out, and I don’t care what time it is!”

With that I headed out, and my, what a difference!  So bright outside, you can actually see where you are running, much more convenient to know what lies ahead on the road!  I figured I’d get one of those shorter runs in, just a few quick miles – better than nothing, and I will just keep doing that more often, hopefully every day.  But of course, as is so often the case with me, even during this short adventure, I have encountered a few curious / funny episodes.

As I was running by one of the old, historical buildings (we have plenty of those in Langhorne, some of them built in 1790s and protected as landmarks), I noticed an old man slowly walk out of the house and onto the sidewalk, as if to get his morning paper.  When the man saw me running by, for some odd reason he raised his cane, shook it violently in the air towards me and said: “You want my jacket, don’t you!”…. Unable to come up with a good-enough response to that, I simply yelled back: “Pops!!  Double the dosage!!”  Could have been worse – he could have attacked me with that stick, which had actually happened way back in my childhood, but that story is yet for another day.

With about a mile to go, I saw a cute lady walking with her dog on the opposite side of the road, but in the same direction.  “Cool”, I thought to myself, and continued on, however, when the girl and her dog noticed me from the other side, for some reason they also began running along rather fast, as if trying to compete with me!  After about 25 seconds of this, I yelled over to them: “OK, you win!”, and received back a generous smile from the girl, as she stopped running – I guess it was a quickie.  The dog did not smile…

On my final approach to the house, I decided to cap it off with a beautiful sprint, as I frequently do.  As I was racing along, our neighbor Marsha (my wife insists that her name is actually Ruth) was coming out to her car and commented on how happy and excited she was to see me running so early in the day…. I wanted to tell Marsha / Ruth that I was about 3 hours late, but decided to just politely ignore the nice lady and keep on running.

Overall – nothing too exciting, but I am not all that pleased with this late timing, too much is happening outside, too many people are out there looking at me and looking to communicate with me.  Let’s hope that my wife will not interrupt my sleep with yet another midnight escapade, so I can return to my “normally” scheduled programming.  Until then, please