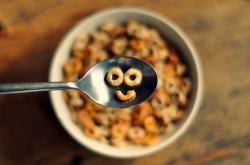 touching upon the same old question, what should happen first – breakfast or exercise?  Of course, I may be just a tad biased, as running before breakfast is the very foundation, the core belief of 5 AM Running!  But there seems to be many pros and cons well beyond my humble opinion.

They discuss a study conducted recently, in which two groups were put together, with both groups exercising like crazy in the mornings.  However, one group was given a nice breakfast before their exercise routine, while the other had to run around and complete their cardio workouts before breakfast.  At the end of the measuring period they checked the results in both groups.  Surely enough, the group that exercised before eating gained almost no weight, and burned the fat they were taking in more efficiently.  The other group actually showed almost no results of any cardio work, rendering all their sufferings in vain!

On a personal note, I have tried anything and everything to lose weight in the past, and nothing worked, I mean nothing!  I would sweat and I would lift, I would run on the treadmill and I would bicycle.  And I could not understand why I could never achieve any results of all the hard work, and I don’t have to tell you – without results to motivate us, no one will keep up the difficult workout routines over any good period of time.  So I’d quit, more than once.

Until, by accident, I stumbled upon a simple finding, and tried to do my cardio before eating, first thing upon waking up.  What a difference!  I actually felt something going inside my body, as if some newly-discovered chemical was eating away at my fat!  So I kept it up, and it certainly became an obsession, if only because I saw results!

So if it worked for me, perhaps it could work for anyone?