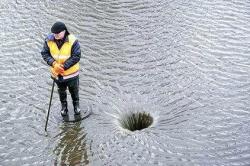 What a title!  Everyone that knows me will tell you – I pretty much NEVER get angry and hardly ever raise my voice.  How is it possible, you ask?  Ah, long story; some psychologists will say that I am bottling it all up inside and one day will simply explode, going “postal” and destroying everyone and everything in sight.  I disagree, but in any event, this is not about that.

Well, not entirely true – I do get angry on occasion.  But only and exclusively at myself!  And that was the case just the other morning.  For various reasons, I have missed one planned running session after another, but Sunday was THE DAY – I said to myself: “I am going, I don’t care what happens, I don’t care if the heavens come down and the earth turns upside down!!!”  Well, the earth did not turn upside down or back to front, but for some reason they decided to change the clocks on me, certainly violating my internal sense of space / time continuum.  And so I overslept …

When I got up, I could literally sense anger coming out through my pores, I hated myself for inventing excuses and falling victim to various circumstances – clock changes, late nights, etc.  I stepped outside even faster than I normally do, and what a start to a run – I took off like a madman!!  I wanted to also punch myself in the face a few times as I ran, just as an expression of my own self-directed disgust, but I figured that may not be a good idea – my neighbors are already terrified of me, no reason to scare them any further.  But as I ran up the street, I kept yelling at myself (not sure if mentally or outloud): “Yeah!  You like that?!  How about this, you lazy son of a gun!?!!  I hate you!”

However, the angry energy will only take you so far, and by the time I was a couple of miles into it, I was completely exhausted!  Breathing hard, legs filled with iron – I clearly pushed too hard too fast.  Well, some traditional schools of running thought will tell you that in such cases you slow down, start walking, catch your breathing and then resume running.  In 5AM Running, however, we simply slow down as much as possible, get some rhythm to our breathing and then continue on.  We don’t stop, not ever!

Conclusion – I made it home after all, but seemingly running on angry energy may not be a good idea after all.  As they say, gotta keep your emotions out of it, no feelings.  Can’t really exercise constructively when angry, especially when angry at oneself!